A short and sweet post about three Goff orks that got painted recently.

So as you know I have been running through the monopose plastic Goff orks that were in the main base game of 2nd edition and these three are the final ones (unless I find one in a bitz box mangled to near destruction). 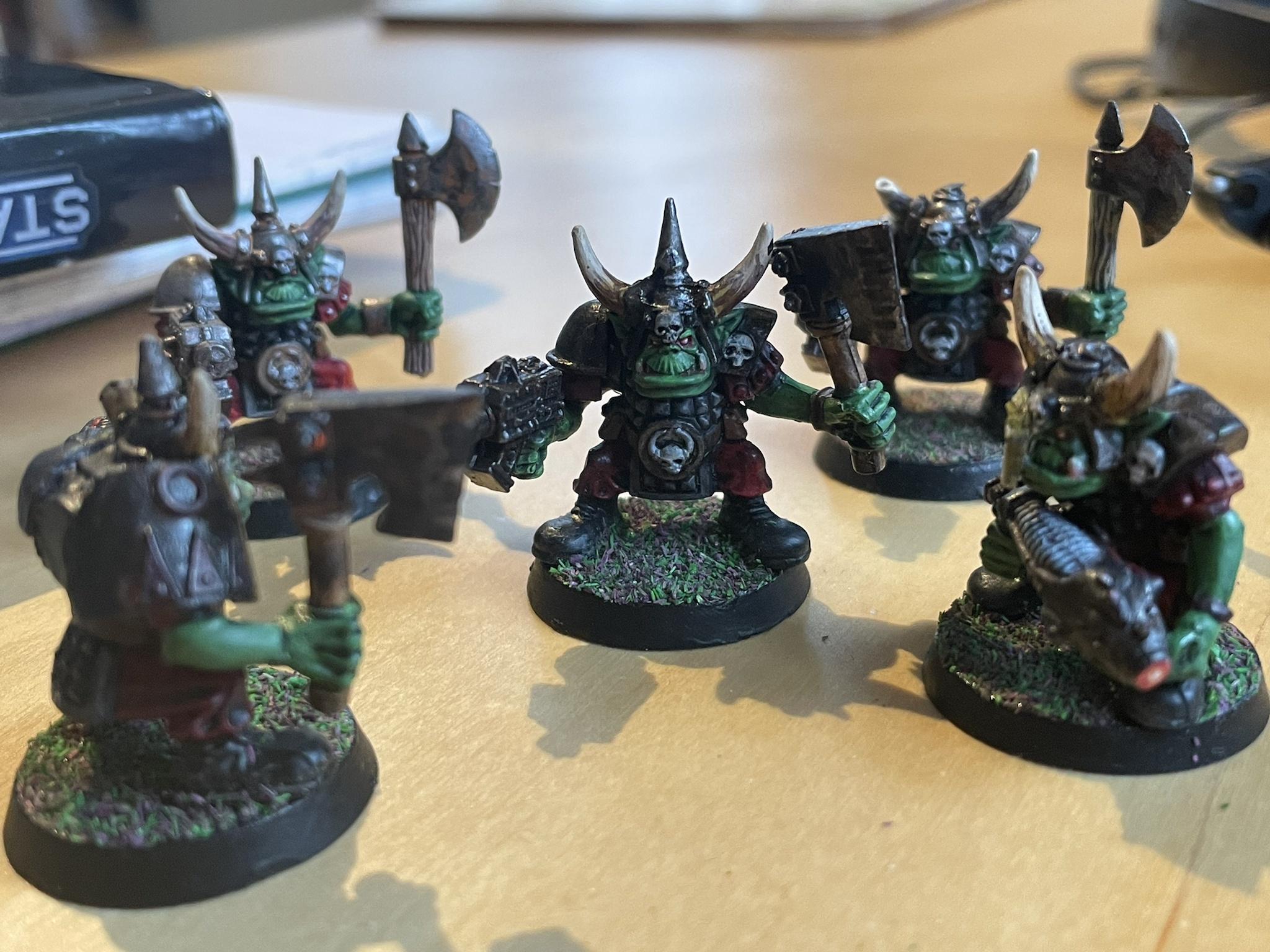 However these three required some serious fixing. While one just needed a left arm fixing and a new axe source the other two needed a bit more. Both had no arms and so another search returned some arms, weapons and some makeshift shoulder plates for the right arms.
The last ork had a bigger problem in that the face had been half hacked at or possibly melted? Either way there was no way to salvage that and my painting skills would be struggling. 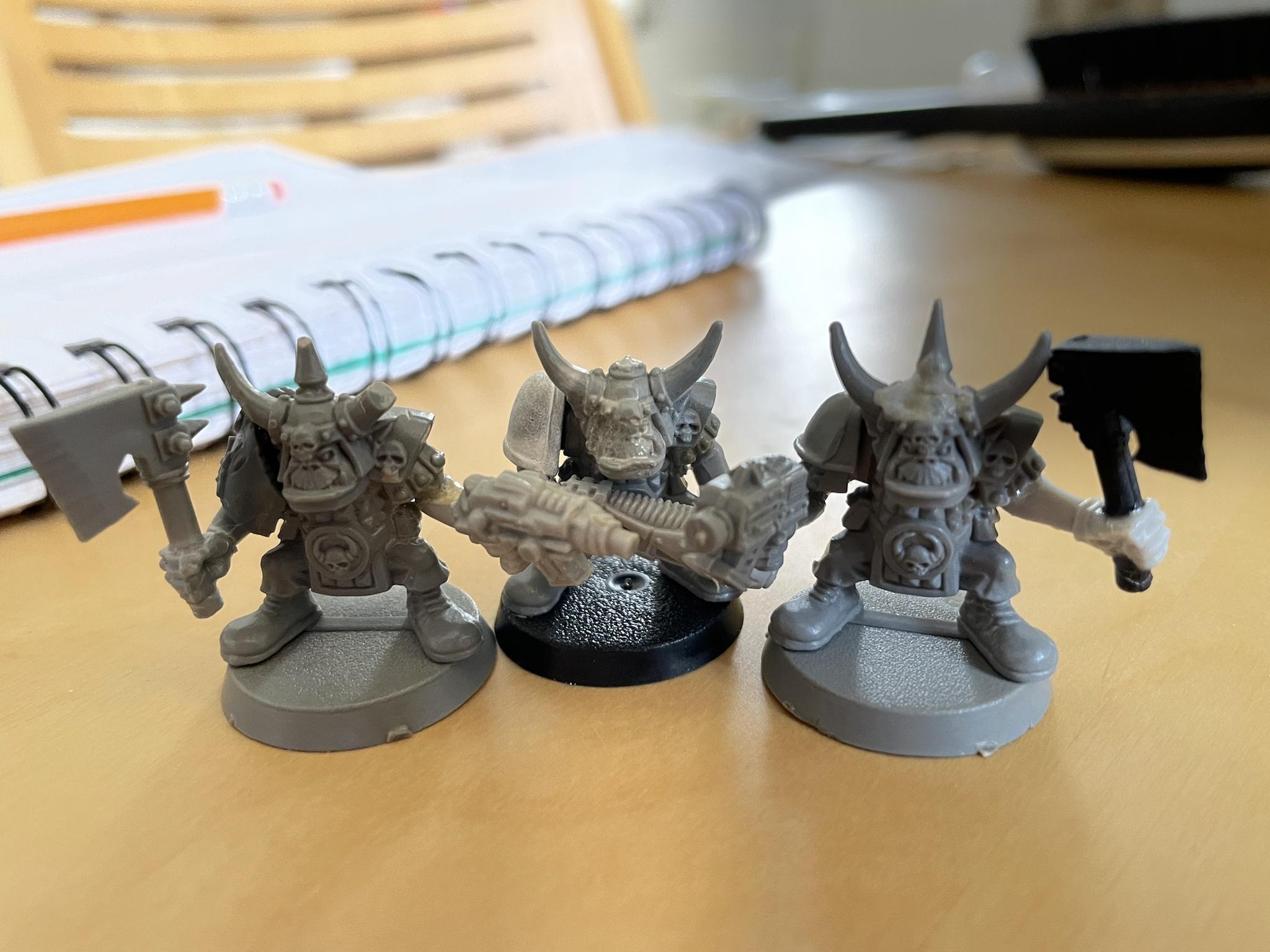 Ere boss? When u gonna paint us?
To resolve this I first armed him with a plasma gun and then decided after some discussion to go for a half mask in the form of the phantom of the opera. So chopping up an old shield part for a warhammer fantasy skeleton unit I put that over the face. 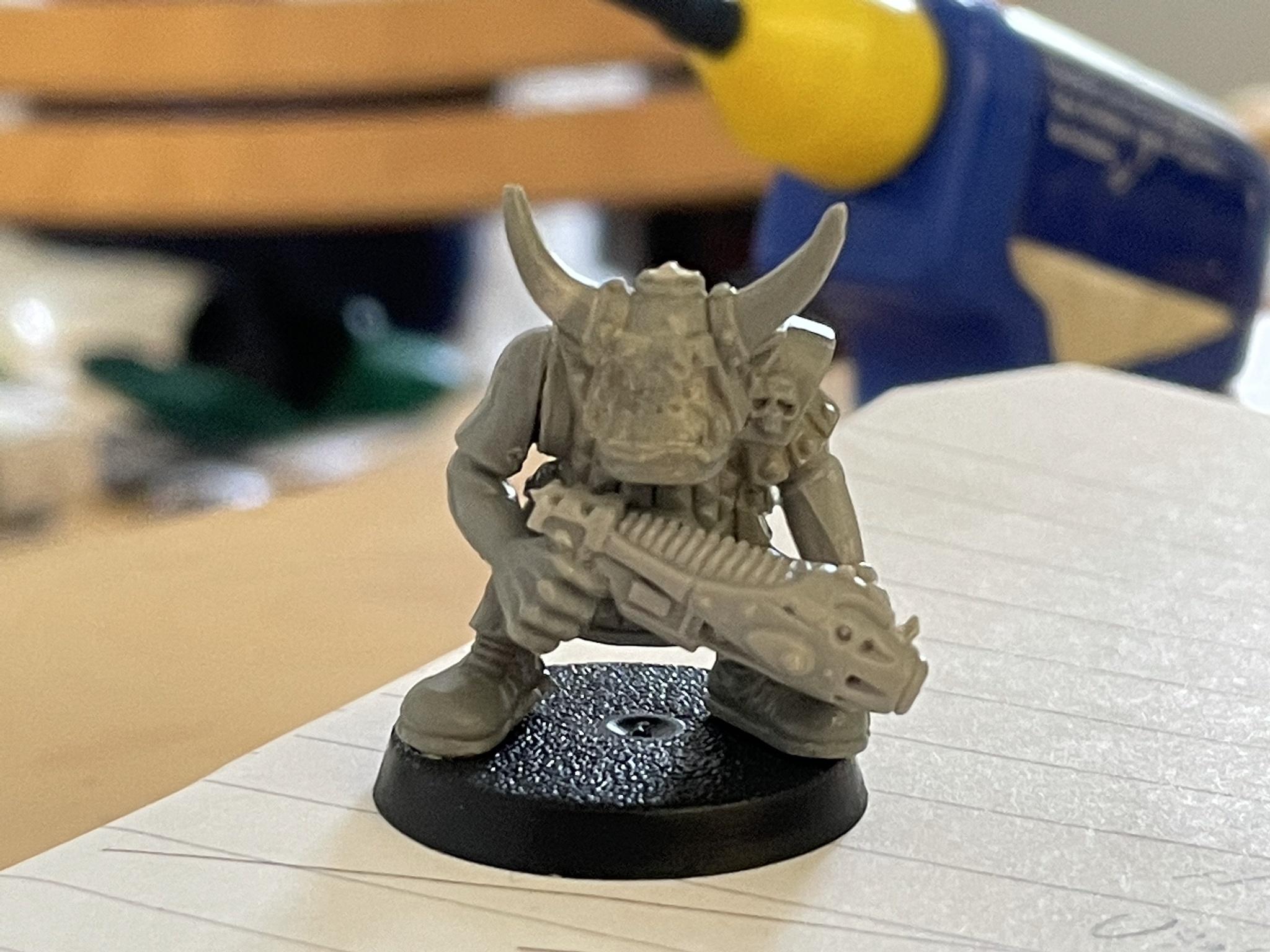 Plasma burns! Gonna scare da ladz this Halloween!!
With the necessary fixes applied it came time to paint the three of them with the tried and tested methods I had used before. I decided the mask was going to be metal and went for a dirty gold look for it. I think it has worked out well in saving the model. 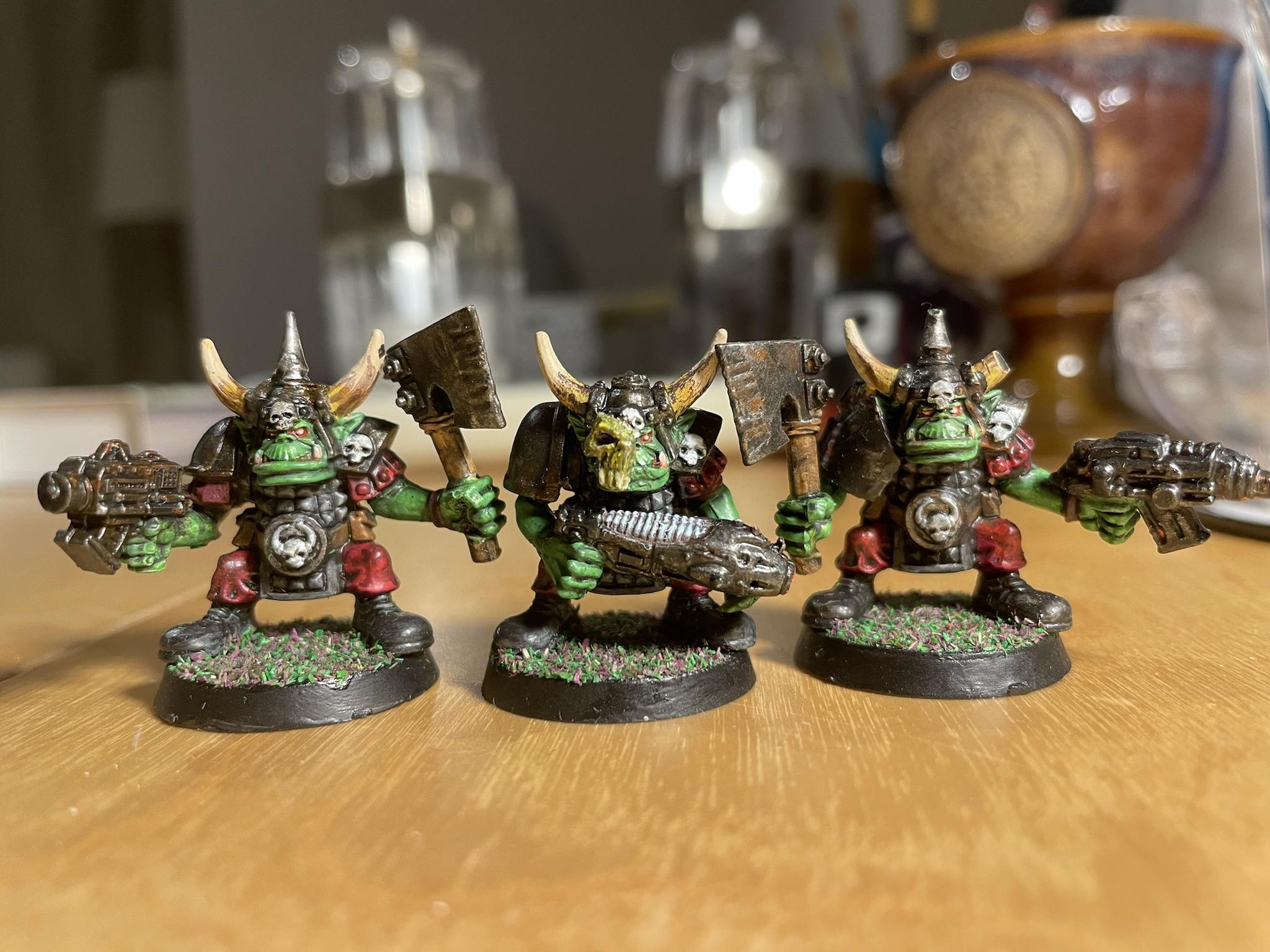 Da boyz got some dakka, then got stuk in to dem beakies. That's how!
That's it for this update, short but fun painting session to get these three orks battle ready, next time maybe some Dreadnoughts or a Grot or possibly something else entirely from the stars..
Until next time :)

I think I'm a banana tree... the oddest of Orks

Oh wow it's been a bit of time since I added a post to this blog hasn't it? The last post was back in March!! where did the summer go? 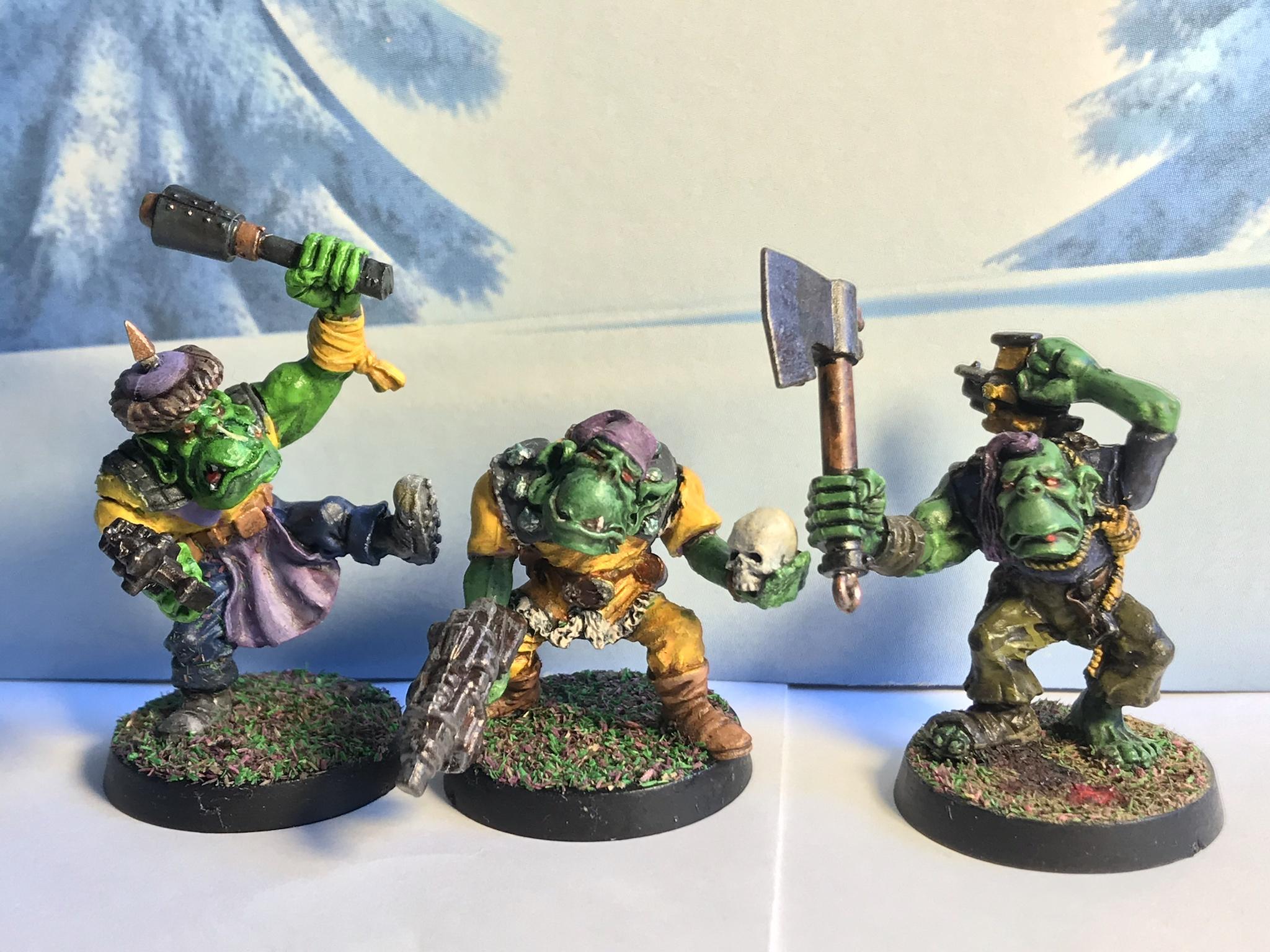 Boss man it still snowing out here!! Found dis nice skull of a ooman though!
Well better something than nothing so here is another post about Madboys the characterful but fairly useless ork army choice in 2nd edition. As I have managed to get them all painted up now it seemed fitting for a little showcase. It's a small squad of only six but they have so much character I'd have to include them in any ork army list for the fun of it. 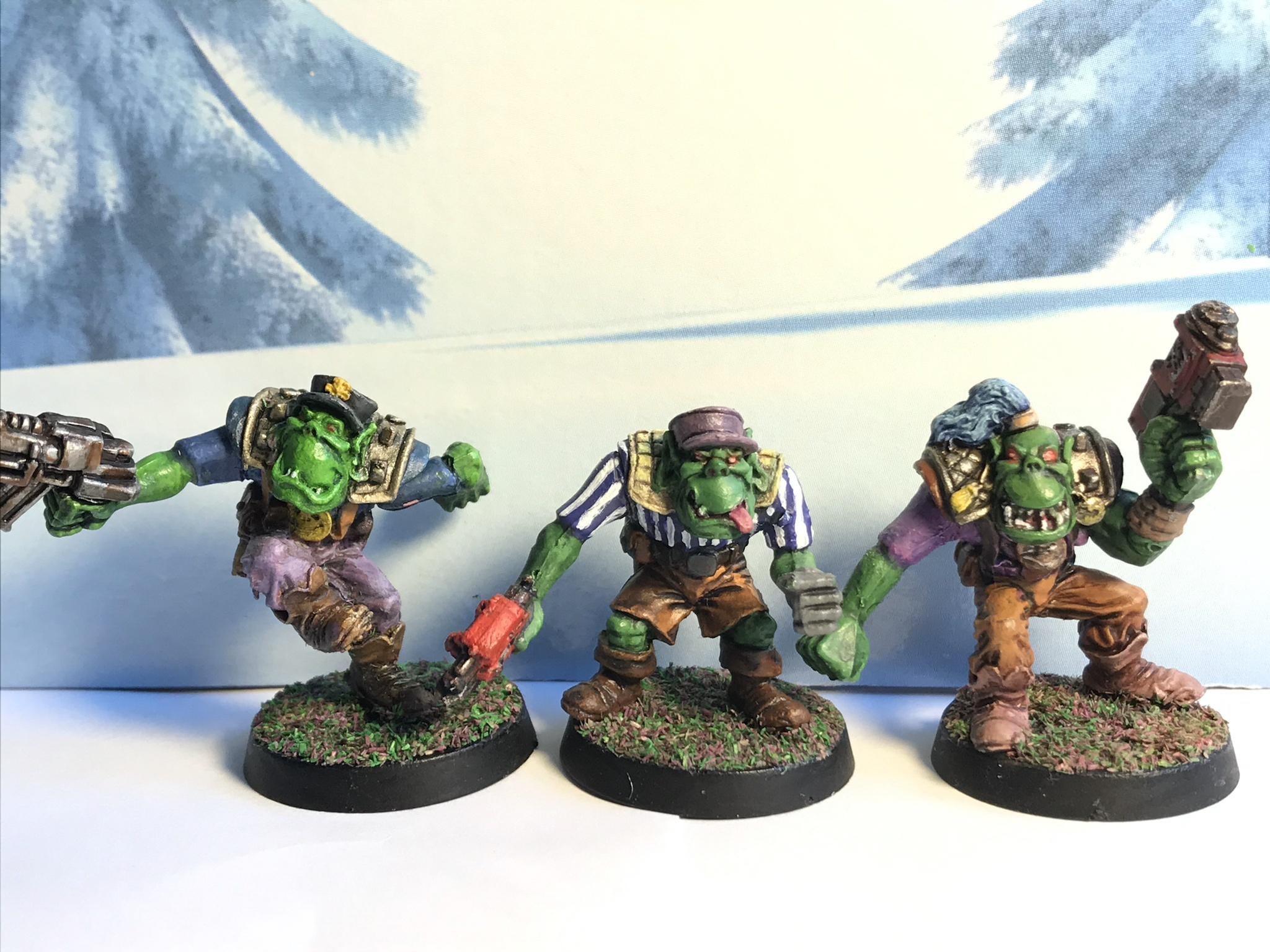 We all goin' on da summerz holidayz, drinkin squiggy colada in da snow!
A couple of shots of the front and back of these orks would be a nice, to show all the little details they have. So click on the read more to see individual photos.
Read more »
Posted by Alex Joker at 12:14 No comments:

It's been almost a year (and quite a while since I made a post at all) since I did a Heroquest blog post and finally the last monster hit the paint table. I could say other projects had taken priority but honestly it was more down to being unsure of how I wanted to paint the stone boss of the original mainstream dungeon exploring game.

Yes the Gargoyle! The dread statue that rolls more attacks than the barbarian and is often best avoided if it can be helped. It's such a great model I wasn't really sure how I was going to paint it at first. Do I go down the route of painting it like a small Bloodthirster or maybe make it a sandblasted rocky colour like on the cover art of the Kellar's Keep expansion. 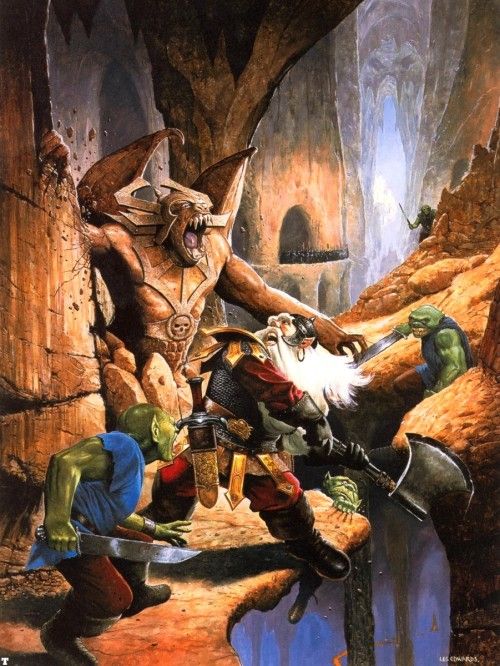 Despite the menace, I do like that one goblin struggling not to fall.

In the end I decided on a halfway between stone and being alive. I decided for a more grey stone than the above artwork as I felt it fit the aesthetic I wanted a bit more. 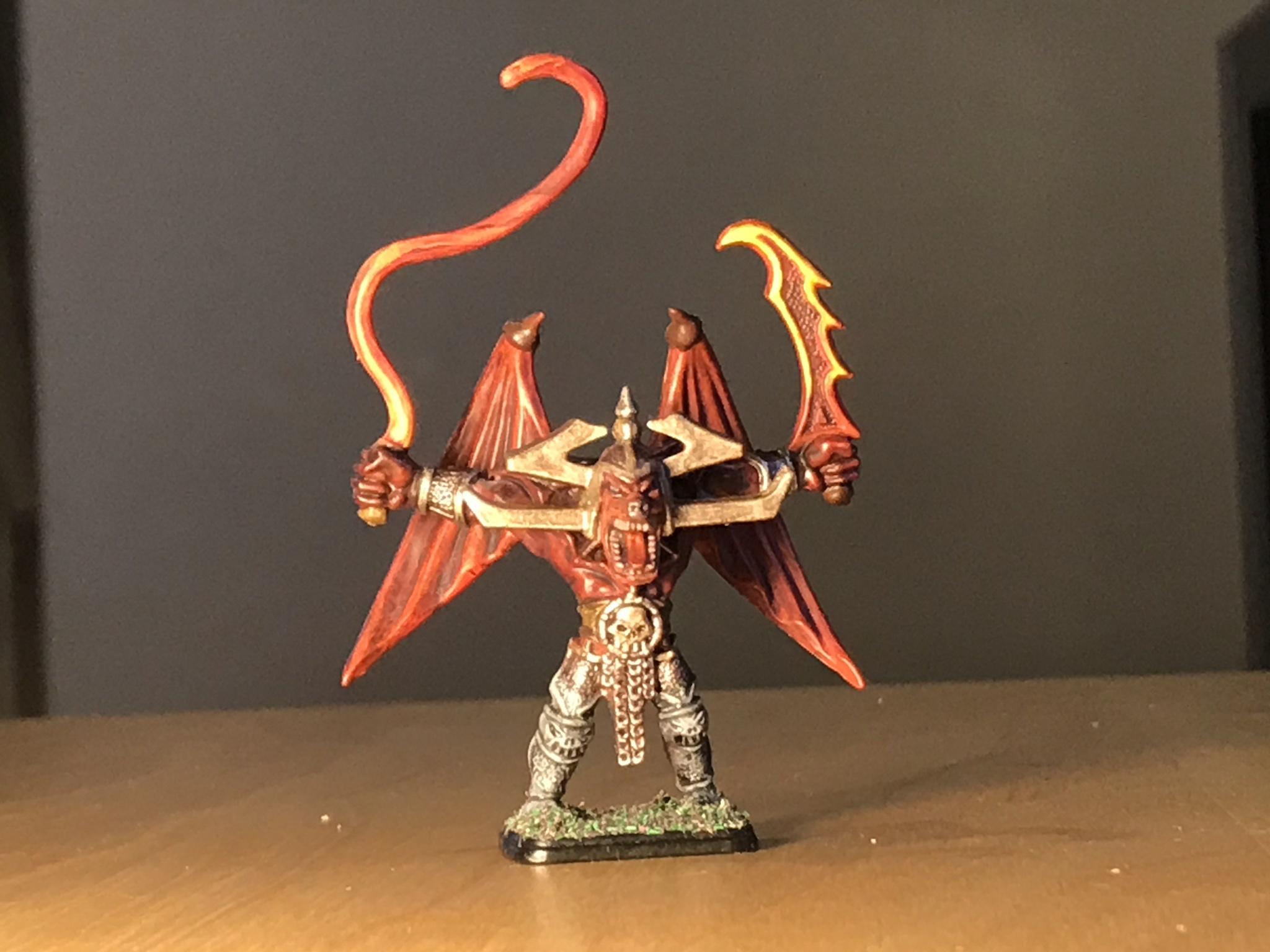 First I need to explain my current camera is not ideal for taking photos and lighting is an issue at the moment so in comparison to some earlier posts these are not the best photos.

I went for the classic khorne style colours for the top half of the gargoyle, nice to use reds and bronze makes a change from the green of orks. Death comes for this plane of wooden ground and chair mountains!

This is the reverse shot of the Gargoyle. I tried to keep the wings simple and just went for some shading on the orange/red colours. Where is that barbarian? I will cleave his head from his bloody corpse!

There we have it all the Heroquest monsters and Heroes are complete, might get a group shot up of them all when this lockdown comes to an end.

In the meantime have a great day and thanks for reading :)

Original punk orks and other lads

The oldhammer hobby is a mixed bag of fun painting, hard to find models and nostalgia. For me one of these nostalgia moments is the original plastic orks from rogue trader which were given to me as a child from an older cousin. 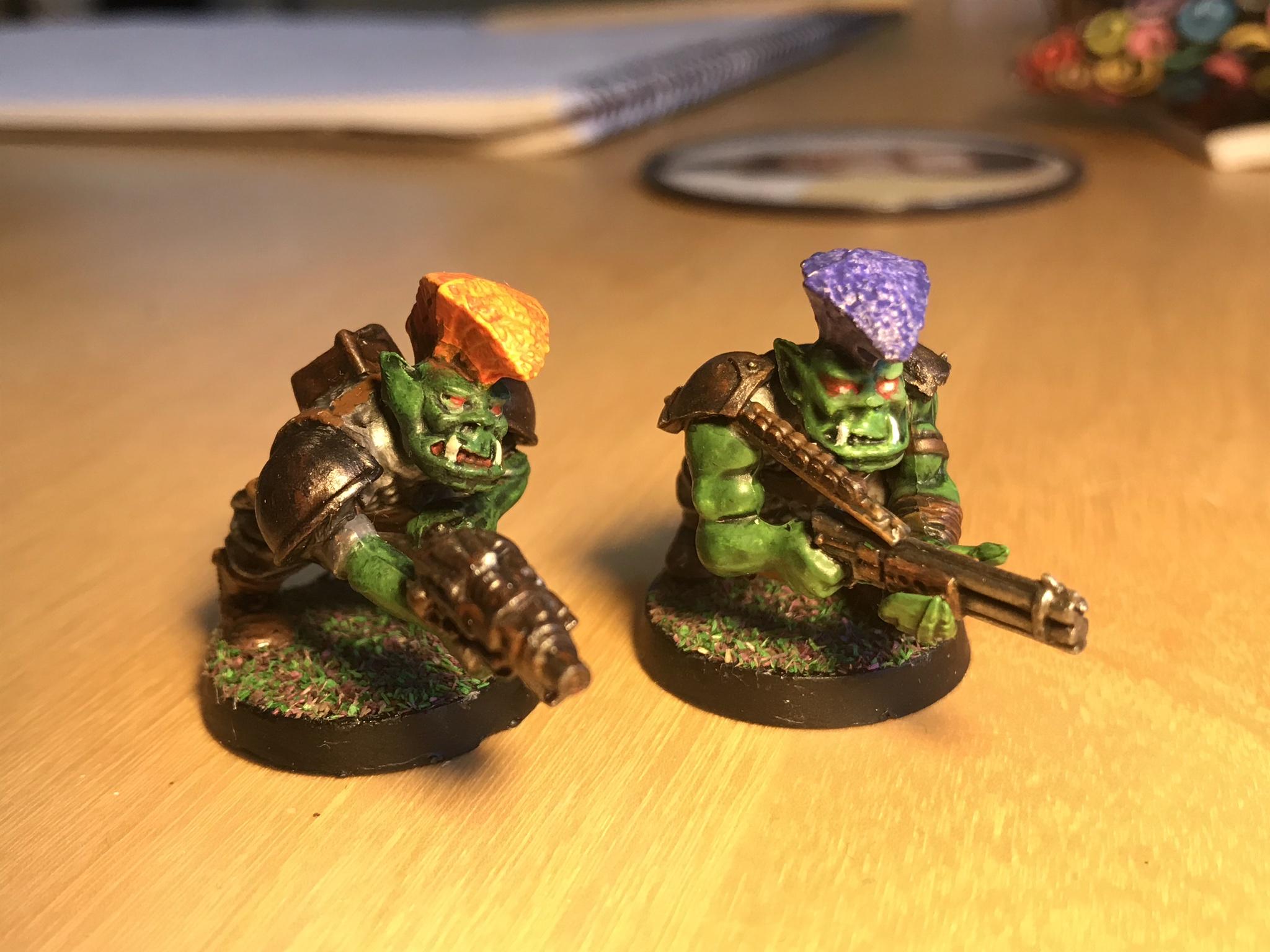 Specialist hair squigs really bring out the green skin complexion.
These orks were already painted up when I was given them and have remained that way. I never really thought a lot of them once I got my own orks from the 2nd edition box, however they did have cool sunglasses and mohawks so remained in use as another squad. Only now after coming back to my ork army and looking through my collection am I beginning to appreciate these guys and the variety of faces they have. 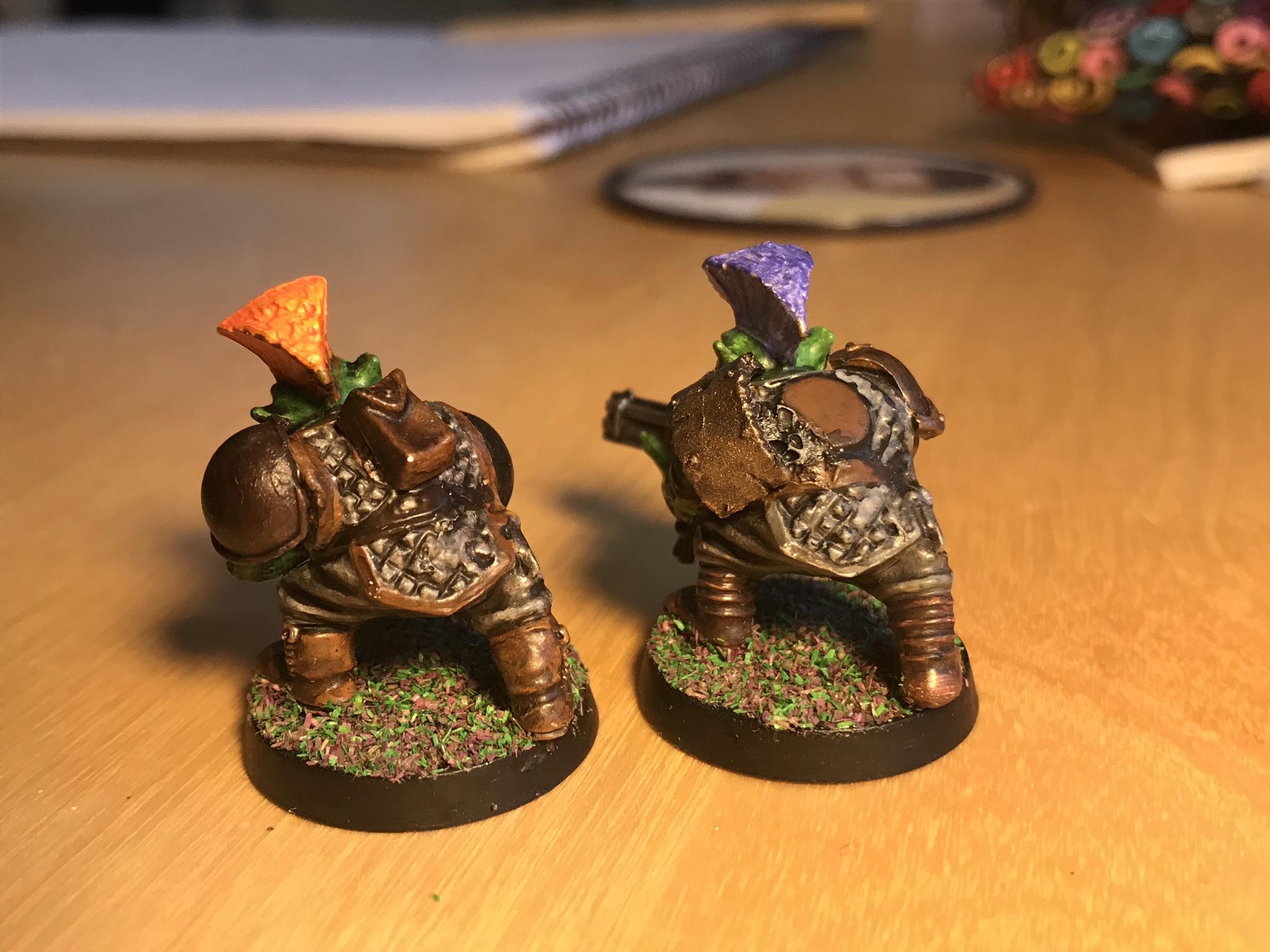 Orks or Fist of the North Star goons?
Having said all that they still needed a fresh coat of paint and some alterations to there arms and weapons. The result of which you can see above. 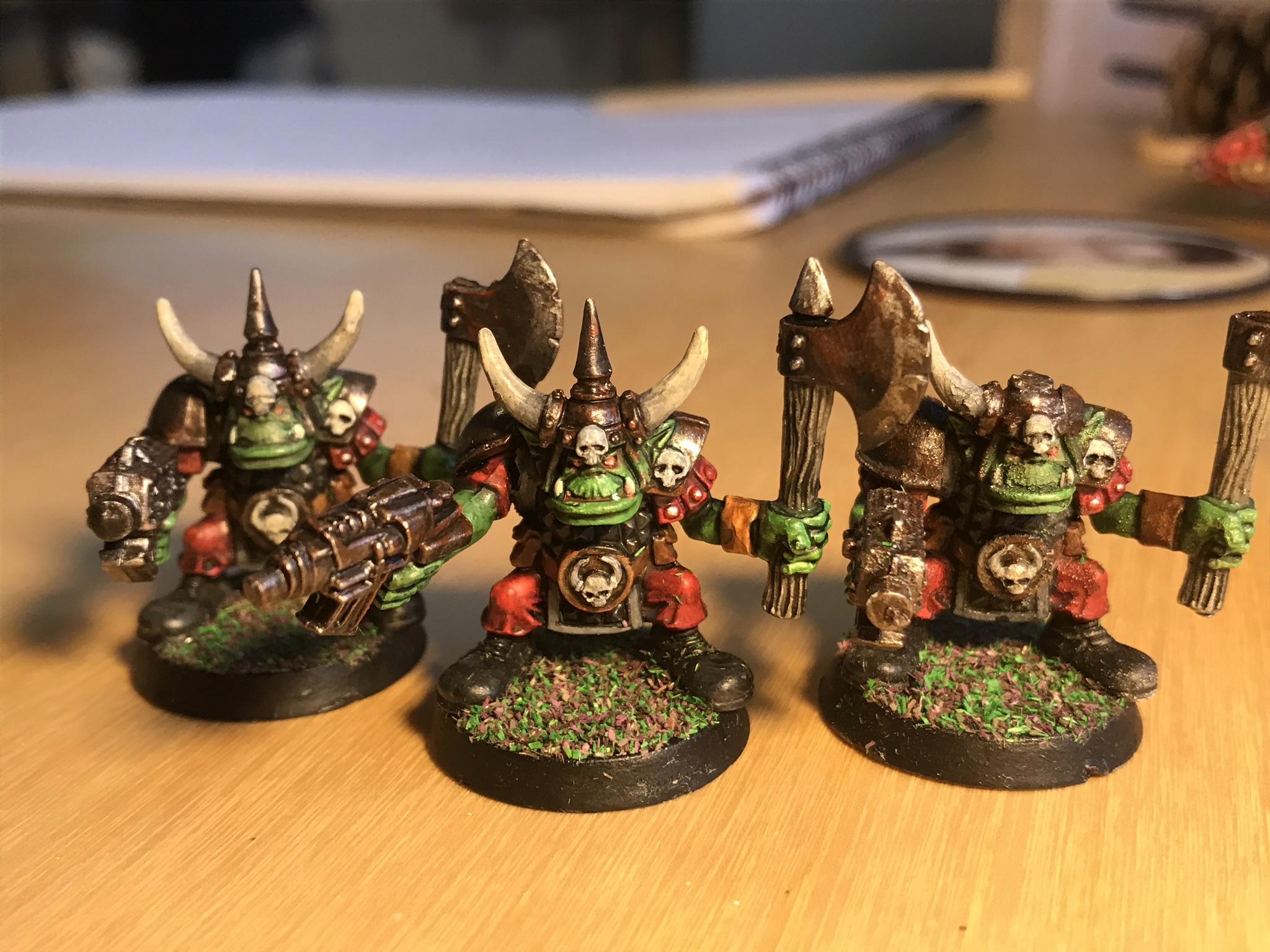 "Right where are the rest of the goff ladz at den?"
Also in the paint pile has been some more Goff Orks. If the last lot needed some repairs these guys needed saving from horrible painting cataclysms. You can't see it now but the ork on the left has a weird bobble effect from some spray paint from 20+ years ago. 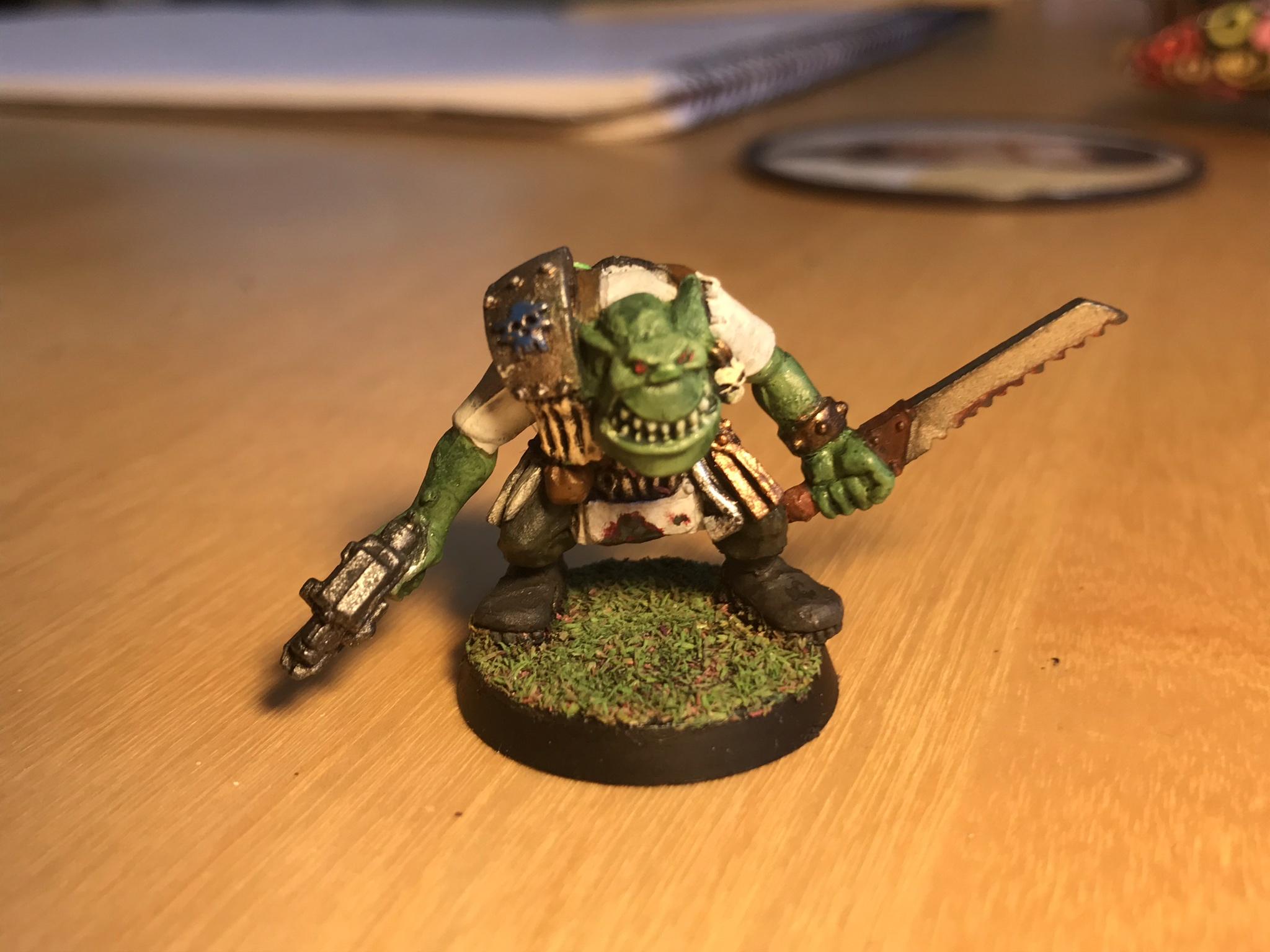 "Ere to fix ya up, what do ya mean ya need dat leg?"
Now this Ork Painboy has actually appeared before on this blog. Way back in 2017 he got in on a photo with two other orks. (Check it out here!) However I was never really happy with him. I felt the colour scheme was too similar to all the other standard ork boyz. So he's had a new lick of white/bone paint to imply he is some sort of doctor. 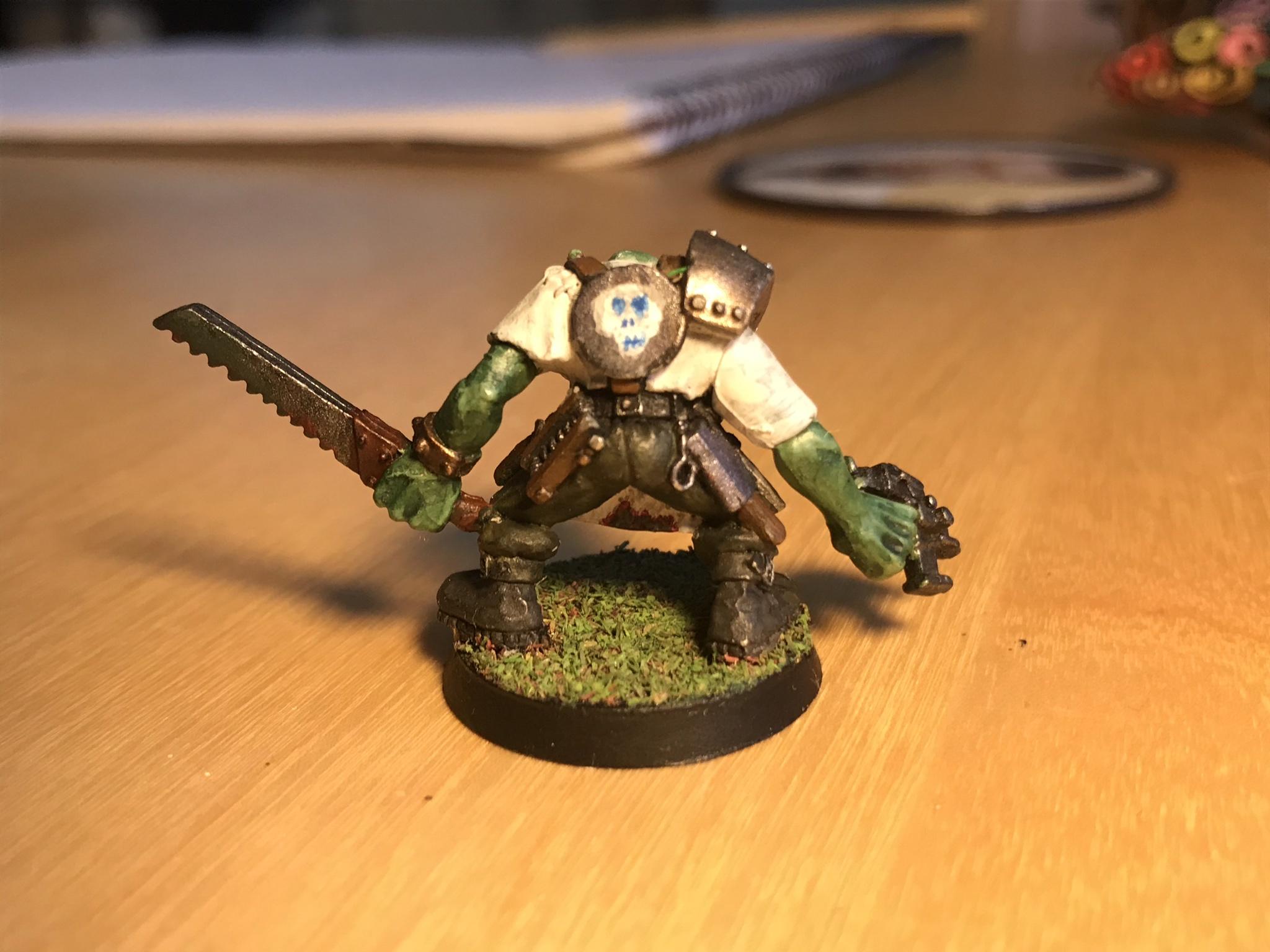 "Forgot Doc's toolz, never a grot around when ya need 'em"
A bit of red/green stains on his apron add a little character to the miniature. The back has always had this blue eyed skull logo and I decided to leave it on him. 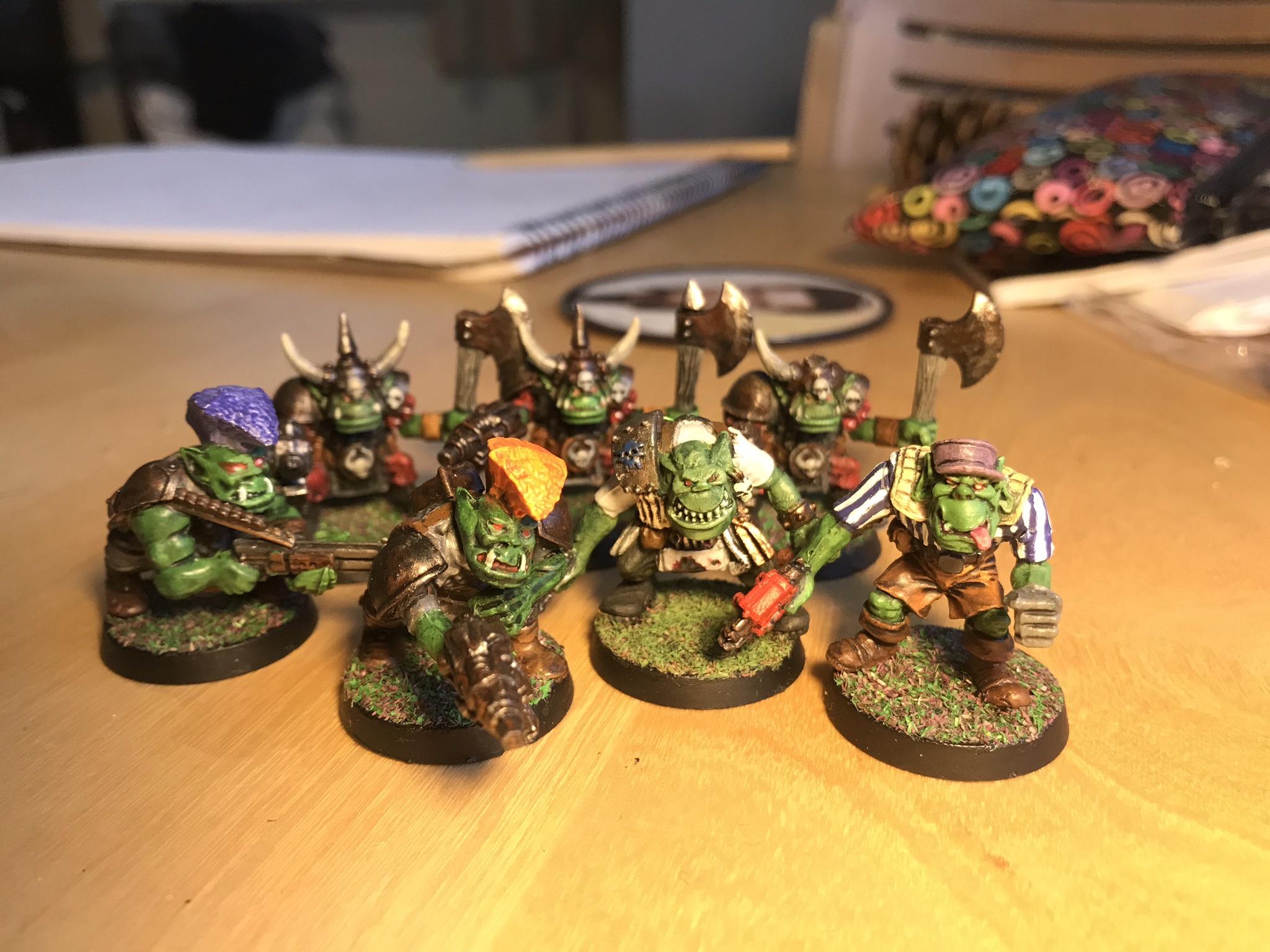 Dungit is much better now. No I didn't just hit im wiv a hammer!
A final shot of all the orks together including another madboy. I took some solo photos of him but hey came out blurry. Guess you will have to wait for me to paint some more for a closer look at that ork.
Until Next Time :)
Posted by Alex Joker at 01:15 No comments:

My Recommended Board Games